Why is Windows Store better for developers than Google Play? 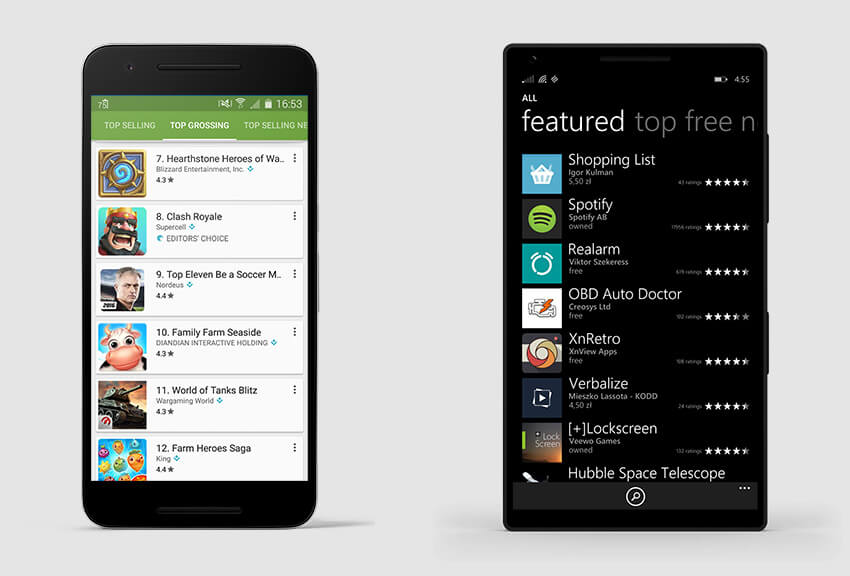 Why is Windows Store better for developers than Google Play?

Developers usually choose Android or iOS as their entry point to the mobile world. They are encouraged by big market share of the mentioned systems. However for small, indie developers it may be very difficult to succeed there and Windows may be better choice. Let’s see why.

Microsoft supports developers in many ways

The thing I want to talk about is ability to market your app or game. Microsoft and its partners offer developers a lot of ways to promote your new app. Google doesn’t offer almost any help. To be clear, I mean here free help, not paid. It is very important especially for solo developers or small studios that don’t have huge budget. With this help we can increase our chance to succeed without spending a fortune.

It is quite common for Microsoft to organize various contests. There are constantly contests for Unity games with great prizes and I’m pretty sure there will be more in the future. It is important for Microsoft to grow their platform and this can be a great way to find new developers. Unity and Microsoft contests are quite common [Source: unity3d.com]

There is an amazing program that is rewarding every developer. Benefits program (link) has 3 levels. First is for the ones that are just getting started. Next can be achieved when you already have some customers and the last one is for developers with at least one popular app. The program includes guidance sessions with experts, discounts for different services, advertising coupons or consideration for promotion in Windows Store.

Another great program created by Nokia (as DVLUP) and later taken over and renamed by Microsoft – link. Developers have tasks (challenge) to do for which they will be rewarded with points. Tasks include things related to app development, adding certain features to your app like ads or IAPs, solving quizes and many more. There are new types of challenges from time to time. Points can be exchange for rewards which in the past included phones and other hardware. Right now we still have some interesting positions like ad coupons or developer tools.

This one is not from Microsoft, but from AdDuplex. AdDuplex is cross-promotion platform. You show ads of other apps in your app and in exchange your app is promoted in other apps. All for free. If you already have one app here and you are releasing a new one, you can easily use popularity of your older app to promote the new one. This is really great tool.

Another thing that AdDuplex has started some time ago is AdDuplex HERO APPS program (link). They are evaluating your app and grant it a package of benefits together with a hero level. Benefits aim to help you promote your app and include a lot of cool stuff. There is even review of your app on WindowsCentral in the highest level which can be an amazing boost. Definitely worth a try.

What can you do on Google Play?

Unfortunately I didn’t find much information about free help from Google or third parties for new developers. There is a new collection on Google Play called Indie Corner. Developers can submit their apps here. This is pretty cool, although number of games here is surely limited and it is only for games.

This is all I have found for both stores. Windows Store is clearly a winner here and it may be a good place to go if you have troubles with getting traction on Google Play.

Do you know any other thing that Google, Microsoft or someone else is doing to help small developers? Let me know on Twitter!